The atria collect blood returning to the heart and transfer it to the ventricles. The ventricles squeeze the blood out to the rest of your body.

The pumping of your heart is regulated by an electrical current or impulse—much like a spark plug in a car. The electrical impulse starts in the sinoatrial (SA) node and then spreads throughout both atria like ripples in a pond. This causes both atria to contract, squeezing blood into the ventricles. 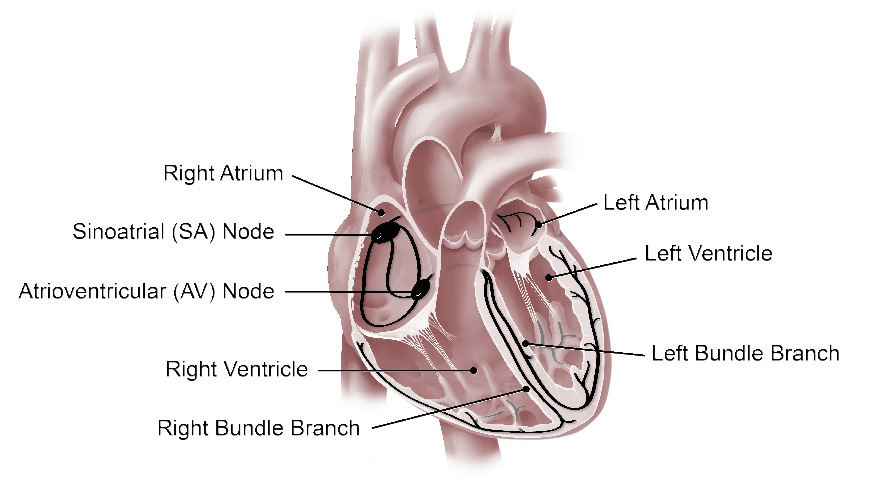 The impulse then travels down to the atrioventricular (AV) node which is like a wire that connects it to the ventricles. The AV node splits into two branches, the left bundle branch and the right bundle branch. From the AV node, the impulse spreads through the bundle branches allowing the even spread of the electrical signal to both ventricles at the same time.

Both ventricles then contract to squeeze the blood out to your body.

When the heart is working properly, this cycle repeats 50 to 150 times per minute.

In atrial fibrillation, the electrical impulses start firing from all over both atria in an irregular pattern. With too many random triggers firing, your heart beats irregularly and, sometimes, too fast. 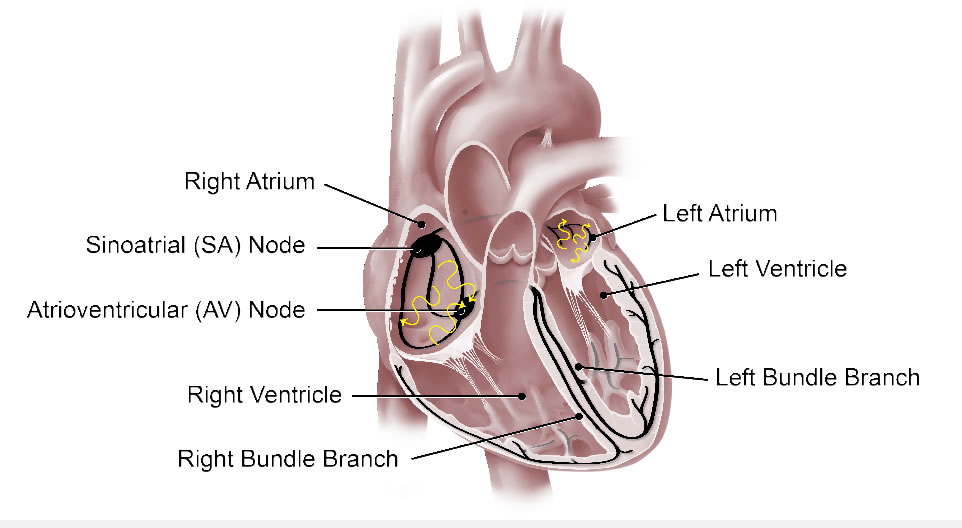 In atrial fibrillation, the electrical impulses are generated outside of the SA node. This causes the heart to beat irregularly, interrupting the smooth flow of blood through the atria.

There are different types of atrial fibrillation:

In many cases, patients who have atrial fibrillation lead perfectly normal lives.

Other health conditions such as high blood pressure, diabetes, sleep apnea, or lung disease may also increase the risk of developing atrial fibrillation.

In many cases, people develop atrial fibrillation for reasons that cannot be figured out.

In atrial flutter, the electrical impulses are more regular but still rapid and inefficient. Some people with atrial flutter feel quite fine and don’t have any symptoms.

Other people may have symptoms similar to atrial fibrillation.

Atrial fibrillation can cause any of the following symptoms:

These are the most common symptoms. You may feel only one or two, or you may have different symptoms.

Many people have no symptoms at all.

In fact, many people with atrial fibrillation are able to keep their symptoms at a minimum and have an excellent quality of life.

Often, atrial fibrillation is diagnosed when people develop symptoms and go to their doctor or to the emergency department. Other times, it is identified during routine examinations.

In order to diagnose atrial fibrillation, your doctor will review your medical history, conduct a full physical exam and order some tests.

Some of the more common tests that your doctor may order include: