More than 32,000 Canadians go into cardiac arrest each year outside of a hospital and more than 90 per cent of them die. In many cases, this is because bystanders didn’t have adequate knowledge of CPR or access to an automated external defibrillator (AED).

Clifton Callaway, MD, chair of the AHA’s Emergency Cardiovascular Care Committee, outlined the AHA’s updated guidelines, which had been published in Circulation in October.

Changes to the AHA Resuscitation Guidelines 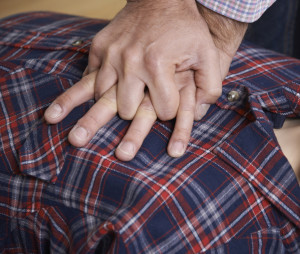 The 2015 update to the AHA resuscitation guidelines, published in Circulation in October, recommend keeping the rate of chest compressions during CPR between 100 and 120 per minute. The previous guidelines, issued in 2010, only focused on recommendations for the low end: at least 100. However, data from a recent large study showed that when the rate of compressions exceeded 120 per minute, resuscitators didn’t push as hard on the chest, which decreased blood circulation.

In spite of this, Clifton Callaway, MD, chair of the AHA Emergency Cardiovascular Care Committee, stated, “People should not be afraid of pushing hard. Ribs bend with chest compressions and the ‘injury’ is usually very mild. It definitely is not life-threatening.”

The 2015 guidelines also re-visit the concept of rescue breaths during CPR. While the 2010 version emphasized compression-only CPR for untrained members of the public, the new recommendations encourage rescue breaths from people willing and able to deliver them. If a rescuer can’t give the breaths or is unwilling, “It’s better to give compressions than not do anything at all,” Dr. Callaway said.

A study of CPR training showed that video-based training was just as effective as conventional manikin-based training for family members of patients at risk of cardiac arrest. People trained with video instruction averaged a chest-compression rate of 88 compressions per minute, while patients who practiced on a manikin averaged 89 compressions per minute. The hands-on practice group averaged a slightly deeper chest compression, but both groups were in range of the depths that provide maximum survival benefits.

“The purpose of this study was to develop a mechanism to get more people trained,” said lead author Audrey Blewer, of the University of Pennsylvania. Envisioning such training being available on YouTube, video on demand, and social media platforms, she indicated “We hope to empower more individuals to use CPR in the typical cardiac arrest situation.”

Research from the University of Toronto highlighted flawed access to publicly available AEDs in Canada. Many of the locations that house the life-saving devices are closed outside of standard business hours.

Graduate student Christopher Sun and colleagues identified all out-of-hospital cardiac arrests in Toronto between January 2006 and August 2014. They found that two thirds occurred during evenings, nights and weekends. At these times, access to AEDs dropped by more than 30 per cent due to the buildings containing them being closed at off hours. These locations included schools, industrial facilities, recreation facilities, and offices. “We place AEDs in high-traffic areas, but we don’t think about temporal accessibility,” said Sun.