A Substantial New Edition of a Major Medical Resource 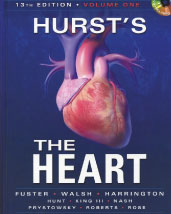 In December 2010, McGraw Hill publishers released the 13th edition of Hurst’s The Heart, one of the essential texts in cardiovascular medicine for more than 40 years. This edition marks a major revision, with 19 new chapters and 59 new authors. Dr. Robert Roberts, President and CEO of the University of Ottawa Heart Institute, has been an associate editor of Hurst’s since 1993.

“First and foremost,” said Dr. Roberts, “a text must provide a solid basis in the fundamentals. There will always be ideas that come and go and unresolved areas of medical knowledge, but the information presented in Hurst’s is well established based on the scientific literature. It is not going to change tomorrow with the next published study.”

“This is important,” he continued, “because Hurst’s is always written with the practicing physician in mind. The book is intended to be used in a clinical context, and as such, it incorporates the various accepted practice guidelines.”

A significant upgrade for the 13th edition is an improved, user-friendly design that includes more graphics and extensive use of colour throughout. The result is inviting and visually appealing in both print and electronic formats.

The new 13th edition of Hurst`s The Heart is the eighth edition for which Dr. Robert Roberts has served as an associate editor.

The progress of scientific discovery moves ever onward, however. The first meeting to plan changes in content and format for the next edition is already set for next year. “The process never ends,” he said with a laugh.