Facing a Rising Tide of Obesity

Obesity rates have grown to such an extent over the past several years that normal-weight individuals are now a minority in Canada. The problem gets worse with age: 16 per cent of adults ages 20 to 39 are obese, while fully one-third, or 33 per cent, of their counter-parts ages 60 to 79 fit that definition. This trend toward a heavier population is impacting care and research at the University of Ottawa Heart Institute. 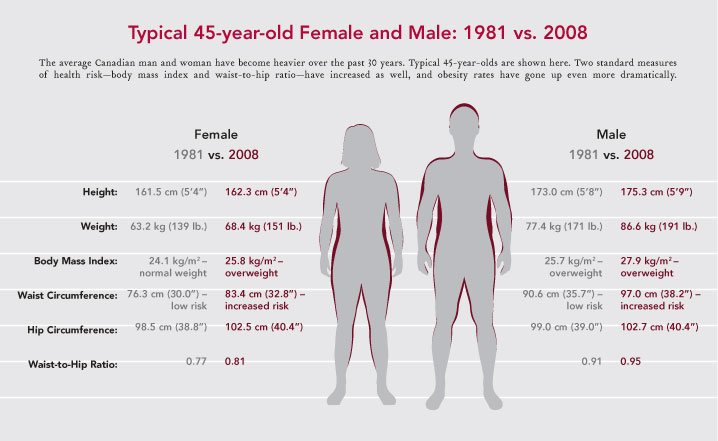 Obesity is tied to heart disease, both directly and indirectly, explained Dr. Frans Leenen, the Director of the Hypertension Clinic and of Hypertension Research at the Heart Institute. Directly, when a body is bigger, the heart has to work harder to provide blood to all the tissues that need it. At some point, just like any pump, the extra load can overtax the heart. Heart disease is the signal that it simply can’t do the job any more.

Indirectly, obesity is a risk factor for diabetes, abnormal cholesterol levels and hypertension—high blood pressure—all of which play a role in heart disease. So, the problem is compounded—people who are obese are at risk for heart disease simply because of their size and because they develop these other conditions.

Obesity is a risk factor for diabetes, abnormal cholesterol levels and hypertension—high blood pressure—all of which play a role in heart disease.

“It can take a long time before any of these things express themselves,” said Dr. Leenen. “You can be a healthy obese person. But the chances of staying healthy go down the greater your weight.”

Together with Dr. George Fodor, a colleague at the Heart Institute, Dr. Leenen has surveyed the Ontario population to determine how body weight is associated with hypertension. He found that the prevalence of hypertension increased as both body mass index (BMI) (a measure of body composition) and age increased. In people older than 60 years of age, 36 per cent of those who were lean had hypertension, compared to 68 per cent of those who were obese. Rates of diabetes similarly increased among people older than 60 as their BMIs increased.

“There is an epidemic of obesity,” said Dr. Leenen. “And there are more and more obese people at the Heart Institute.” He indicated that the growing number of such patients has required changes to accommodate them. Larger chairs are now available and physicians frequently use thigh cuffs around the arm instead of arm cuffs when taking blood pressure, to ensure a good fit.

Obese individuals are often more complex patients because of the presence of complicating factors such as diabetes. In these cases, physicians are likely to be more aggressive about treating hypertension or high cholesterol because of the increased risk of heart disease.

Osteoarthritis is another common co-existing condition, due to the physical strain of excess weight on joints, adding another medication and further possibility for drug interaction to the mix. “The whole regimen becomes more complicated,” said Dr. Leenen.

In the catheterization lab, severely obese patients have a greater risk of complications when catheters are inserted in the usual site in the groin for angioplasty and stenting. Heart Institute interventional cardiologist Dr. Edward O’Brien presented early results of his research into the use of the radial artery in the wrist at the American Heart Association Scientific Sessions last fall.

Dr. O’Brien’s team found that the radial artery technique reduced complications in patients with a BMI of 40 or greater. The normal range for BMI is from 18 to 24.9. The researchers are now analyzing a much larger sample of 21,000 Heart Institute patients, 12 per cent of whom underwent radial artery catheterization, to see if these results hold true.

In the bigger picture, “obesity is creating enormous health issues,” said Dr. Leenen. He suggested that society needs to take a stronger stance on obesity and take steps to reduce it by making changes that encourage physical activity and healthy eating. “We don’t accept smoking. We should not accept obesity as a normal variation. We should work to get it down. There are a whole host of factors that can be addressed to make life less sedentary.” However, he indicated that the best way to address obesity is to prevent it in the first place.

Dr. Ruth McPherson agreed. As director of the Atherogenomics Lab and the Lipid Clinic at the Heart Institute, she is also finding that more of her time is being spent on obesity. She is currently conducting a large study with Dr. Robert Dent, Medical Director of the Weight Management Clinic at The Ottawa Hospital. They have been funded by the Canadian Institutes of Health Research to examine the genetic factors involved in obesity.

Genes play as large a role in the condition as do environmental factors such as diet and exercise. But, she said, the two work together in insidious ways. “If people are physically active, even with elevated genetic risk, they are much less likely to be obese,” she explained. However, when a major genetic predisposition to obesity is present, it is difficult to maintain a normal body weight in a world where cars and computers reduce physical activity.

Even when obese people go on extreme low-calorie diets, there is enormous variation in how much weight they lose. Responsibility for this, Dr. McPherson said, can be laid squarely on their genes.

So, while Dr. McPherson agreed with Dr. Leenen that a more active population eating healthier diets will go a long way toward preventing obesity, she emphasized that attention also needs to be paid to the differences among individuals that make them more or less prone to gaining weight.

Right now, she said, there are few good therapies for obesity. But identifying the genetic factors that are at the root of obesity will allow for early intervention among people at high risk for weight gain or poor weight loss in order to promote active, healthy lifestyles and, hopefully, prevent obesity in the first place. This genetic information may also help in deciding when treatments such as bariatric surgery are needed. If a person is identified as having a genetic makeup that impairs the response to diet and exercise, surgery may become an option.

Dr. McPherson indicated that there is some encouraging news. Obesity figures appear to be plateauing over the past four or five years. “These data are very reassuring,” she said. “But we still have a large proportion of obese individuals who require treatment.”