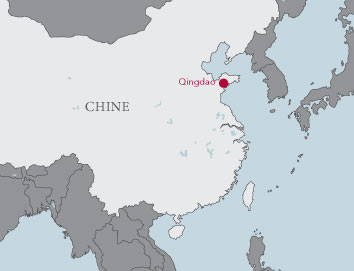 Qingdao is a metropolis on the northeastern coast of China. Like many Chinese cities, it has seen explosive growth. In the past decade, Qingdao’s population has more than tripled to nearly 9 million people. Such growth has spurred the need to expand and modernize medical facilities and programs. In April, the Heart Institute and Qingdao Municipal Hospital entered a five-year cooperative agreement under which Heart Institute physicians will mentor the rapidly growing cardiac medicine program in the booming Asian city.

This new collaboration has its roots in a relationship that began 14 years ago, when a young cardiac surgeon from Qingdao named Dr. Yifan Chi contacted Dr. Thierry Mesana, then the Chair of Cardiac Surgery at the University of Méditerranée in Marseille, France, and now Chief of Cardiac Surgery at the Heart Institute. Dr. Chi hoped to do a cardiac surgery fellowship with Dr. Mesana to learn advanced surgical techniques not yet available in China.

At the time, no hospital in the Chinese city had ever done a cardiac bypass operation. At the unit’s opening, “Dr. Chi and I did the first bypass surgery in Qingdao in early 2001!” – Dr. Thierry Mesana Chief of Cardiac Surgery, UOHI

Dr. Chi trained with Dr. Mesana until 2001, when he returned to Qingdao to lead a new cardiac surgery unit opening in one of the city’s oldest hospitals. “He started from scratch, with the knowledge he had acquired with me in Marseille,” said Dr. Mesana. At the time, no hospital in the Chinese city had ever done a cardiac bypass operation. At the unit’s opening, “Dr. Chi and I did the first bypass surgery in Qingdao in early 2001!” he remembered. It was his first visit to China.

Dr. Chi’s new unit thrived and, in 2008, moved to the newly built Qingdao Municipal Hospital, into a dedicated heart centre providing both cardiology and cardiac surgery services. With the city growing so quickly, Qingdao Municipal Hospital is already planning an expansion campus, and Dr. Chi and his colleagues hope to establish a heart institute of their own there with the help of Dr. Mesana and the Heart Institute. 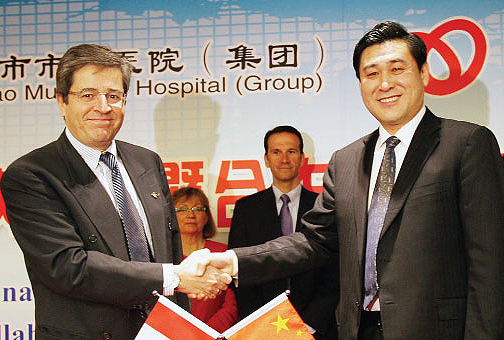 Although the Chinese team had offers from centres in the United States, they reached out to the Heart Institute for the quality of care it provides and the strength of its organizational model. A delegation of five doctors from Qingdao came to Ottawa in February to meet their potential new colleagues and sign a letter of intent. Then, in April, Dr. Mesana; Heather Sherrard, Vice President of Clinical Services; and Dr. Marino Labinaz, Director of Interventional Cardiology, travelled to Qingdao, where they finalized the agreement.

The five-year agreement has three components. Through a visiting professorship program, a Heart Institute cardiologist and cardiac surgeon will visit Qingdao twice a year to work with the doctors there and help them learn complex new procedures. Under a fellowship program, the Qingdao hospital will send six doctors to the Heart Institute for one- to two-year clinical fellowships.

Finally, through an observership program, Qingdao will send twelve individuals—doctors, nurses, administrators and researchers—to observe Heart Institute processes and procedures. “Close to the end of the five years, probably year four or year five, we will start working very actively with them on the plan and the design of their new heart institute. This is where our administration will become more involved,” explained Dr. Mesana.

“This is the start of a very strong collaboration between a leading institution in Canada and a very promising centre in Qingdao,” continued Dr. Mesana. “I think it magnifies the international aspect of the Heart Institute.”

“We already have international collaborations—we exchange science with our U.S. colleagues, our European colleagues, but if we want to expand the reputation of the Heart Institute, to me, China is the first country to do that with because I think it’s a new epicentre of the world,” he concluded.