As commentaries on radiation go, Peter Parker likely summed it up best: “With great power comes great responsibility.” Although no one at the University of Ottawa Heart Institute has had to deal with the complications of acquiring superpowers from a radioactive spider, the staff is profoundly aware of the immense responsibility that comes with the use of radiation. In fact, the Heart Institute is setting new standards for the targeted and limited use of radiation by dramatically reducing patient exposure across its array of cardiac imaging tests.

To be sure, radiation has not always been associated with health; in fact, it has the reputation of something to be avoided at all costs. As it happens, over the past few decades, medical imaging technologies employing radiation have transformed much of medical practice, offering unprecedented opportunities for diagnosing disease. These go by some now-familiar acronyms: CT (computed tomography), SPECT (single-photon emission computed tomography), and PET (positron emission tomography).

The technologies behind these systems vary, but each offers images of the human body that are nothing short of astonishing—revealing not just the physical structure that lies beneath the skin, but intricate biochemical processes such as whether a drug is hard at work or just sitting there. Cardiac imaging has become an essential part of not only diagnosing a patient’s condition but determining and monitoring his or her treatment.

Like a powerful drug, radiation is strong medicine, to be employed carefully. The media has given the subject a good deal of attention over the last couple of years, and at the recent American Heart Association Scientific Sessions, the largest cardiovascular meeting in the world, a session was devoted to advising medical professionals on “Achieving Very Low Dose Imaging.” In this respect, the Heart Institute has not only kept pace with developments in this field but stands at the forefront of progress.

“The onus is on us to make sure we’re doing the best for our patients in terms of minimizing the risk and maximizing the benefits.” – Robert deKemp, PhD Head Imaging Physicist, UOHI

“The story is one of continued evolution of the technology,” explained Dr. Terry Ruddy, Director of Nuclear Cardiology. He pointed to innovations associated with well-established systems, such as CT, the familiar doughnut-shaped X-ray machine that yields three-dimensional pictures of the heart. CT scans now offer a practical, non-invasive form of angiography to identify the site of problems, like the dangerous narrowing of blood vessels from the buildup of plaque on artery walls.

Staff cardiologist Dr. Benjamin Chow, Co-Director of Cardiac Radiology, has been among the pioneers of cardiac CT and its application in patients. And he has been among the foremost adopters of methods that significantly reduce the amount of radiation that is required.

Computer software, for example, can synchronize the scanner to the heartbeat, turning the X-ray on and off as the heart relaxes. Since pictures are acquired only during a portion of the cardiac cycle, the patient’s exposure is minimized.

The Heart Institute’s CT program has reduced radiation exposures to about a third of what they once were.

“This method reduces the radiation dose to the patient by about 40 per cent,” he observed. Further reductions have been made using sophisticated reconstruction software and the latest, most sensitive detectors, so that the same quality of image can be obtained with a smaller amount of X-ray energy.

The first half of the 20th century was characterized by the earliest scientific studies of radiation, culminating in the building of the first atomic bomb. The second half of the century saw the rise of nuclear medicine, which put the highly energetic particles emitted by radioactive materials to use as the workhorses of medical imaging.

While the X-ray uses radiation to record images of interior structures that are otherwise opaque to visible light, it can capture only physical features and cannot distinguish between living and dead subjects. PET and SPECT scans, by comparison, can capture evidence of biological and chemical activities that are taking place within the body.

Millions of PET and SPECT scans are conducted in Canada every year. Both rely on the use of radioactive agents known as isotopes, which are attached to specially formulated “tags” called tracers and injected into a patient’s bloodstream. Depending on the chemical nature of the tag, the injected material will migrate to the particular part of the body of interest.

Although the injected amount of these isotopes is extremely small, they serve as beacons for detectors placed around the body. Within a matter of seconds or minutes, these radioactive particles provide a picture of their local biochemical setting, such as how well different parts of the heart muscle are receiving oxygen-rich blood.

“The sensitivity that we have with nuclear medicine is phenomenal,” said Heart Institute medical physicist Glenn Wells, PhD. “We can detect trace quantities of substances. That has incredible advantages when you’re looking at trying to find out what truly is going on in a living system.” 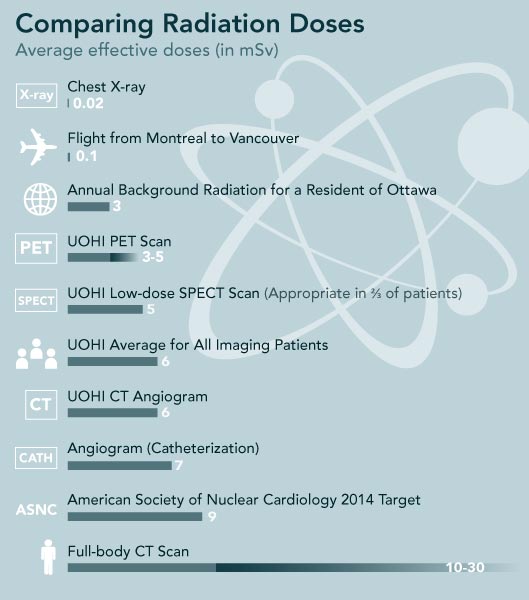 As techniques have advanced, the Heart Institute’s CT program has reduced radiation exposures to about a third of what they once were. The remaining exposure, Dr. Chow noted, brings with it a very slight lifetime risk of developing cancer. But for most patients, that small long-term risk is outweighed by the much more immediate risk of a stroke, heart attack or death from heart disease.

For even more sophisticated imagery, radioactive agents called isotopes are injected into the bloodstream. The radiation involved typically lasts no more than a few hours, and in some cases, just a few minutes. But during that time, the particles emitted from within the body can be detected and turned into visual representations of internal processes that would otherwise be invisible.

SPECT and PET scans are based on this use of isotopes. As with CT scans, the latest generation of detectors are much more sensitive, with the resulting images becoming better even as the necessary amount of radiation has declined. And like CT, any attendant risk also carries the promise of more effective treatment.

“It adds value in terms of other types of information, which can increase the certainty of diagnosis,” said Head Imaging Physicist Robert deKemp, PhD, explaining that a good PET scan makes many subsequent procedures unnecessary. “If you have a definitive test that helps you get the right therapy, it can reduce the need for additional tests.”

He added that minimizing radiation is not just a matter of changing technology but also of changing clinical protocols. For example, heart patients have typically been diagnosed with a two-part testing regime: They are scanned once when they are at rest and the heart is beating normally, then again when the heart is under some kind of stress, such as after a brief workout on a treadmill.

More recently, it has become clear that, if the stress portion of the test reveals a problem, the resting portion of the scan can be eliminated. In this way, the radiation exposure can be cut in half for a significant number of individuals. And on top of everything else, it saves time and money.

Similarly, if a patient is able to spend a longer time in front of the scanning equipment without moving, the same image can be generated with much lower doses of radiation. These kinds of commonsense solutions , explained de Kemp, reflect an attitude toward radiation that puts patients first by giving them options: “The onus is on us to make sure we’re doing the best for our patients in terms of minimizing the risks and maximizing the benefits.”

Or as Dr. Ruddy put it, “It’s about giving the right test to the right person.”

According to Heart Institute President and CEO Dr. Robert Roberts, it is an attitude that has met with extraordinary success, as research and clinical staff adapt existing methodologies and equipment to lower radiation levels to an unprecedented degree.

“I’m very proud that we have people working at that level,” he said. “We don’t just take things off the shelf and use them. We’ve made major innovations.”

Raising the Bar, Lowering the Limit

A dose of radiation received by the human body is measured in sieverts (Sv). This unit takes into account the biological effects of radiation and is tied to a particular risk of eventually developing cancer. Amounts upwards of 1.0 Sv were encountered by workers at Japan’s Fukushima power plant when its reactor was damaged, posing an immediate threat to their health. In contrast, typical dental X-rays transmit a dosage on the order of several microsieverts (μSv)—roughly a million times less—a level that most people would regard as negligible.

According to Heart Institute medical physicist Glenn Wells, we pick up radiation as part of everyday life in amounts that fall in between these two extremes, with no known ill effect.

In fact, studies of people living in places where they receive as much as 25 mSv annually have shown no discernable difference from other places with respect to average life span or incidence of cancer. A full body CT scan also falls within this range, perhaps 10 to 30 mSv.

Within the realm of cardiac imaging, the American Society of Nuclear Cardiology has announced a standard it would like to see upheld by 2014, with 75 per cent of all patients receiving an average of no more than 9 mSv for any given procedure. Wells noted that most procedures at the Heart Institute are already well below this mark, heading for an average of around 5 mSv. As impressive as that might appear, he insisted that these figures remain moving targets, driven by technological progress and scientific insights surrounding how radiation is used in medicine.

“Twenty years ago, they said 10 mSv was perfectly fine,” he added. “The world has changed a bit, and now people are expecting more. In 20 years, maybe 5 mSv isn’t going to be low enough. Maybe we’re going to need to push it to 3. But by the time that comes around, we’re going to be able to deliver that as well.”