Fish Oil Good for Your Heart? Evidence Called into Question 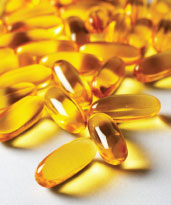 Oily fish is widely recommended as part of a heart-healthy diet, based in part on a landmark study from the 1970s. In it, Danish researchers Hans Olaf Bang and Jørn Dyerberg connected the low incidence of coronary artery disease (CAD) among the Inuit of Greenland (referred to as Eskimos in the study) to their diet, rich in whale and seal blubber. A new assessment of that study, led by researchers from the University of Ottawa Heart Institute, has found that the Inuit actually suffered from CAD at the same rate as their Caucasian counterparts, meaning there is insufficient evidence to back Bang and Dyerberg’s claims.

Using 40 years of new information and research, a team of investigators set out to re-examine that original study of Inuit Greenlanders and CAD. That study is still widely cited today when recommending dietary fish oil supplements (like omega-3 fatty acids) or oily fish to help avoid heart health problems. However, the new review of the information, published in the Canadian Journal of Cardiology, has found that Bang and Dyerberg failed to actually investigate the cardiovascular health of the Inuit population and that the conclusion of a cardioprotective effect of their diet is unsubstantiated.

“Bang and Dyerberg’s seminal studies from the 1970s are routinely invoked as ‘proof’ of the low prevalence of CAD in Greenland Eskimos, ignoring the fact that these two Danish investigators did not study the prevalence of CAD,” explained lead investigator George Fodor, MD, PhD, recently retired Head of Research for the Prevention and Rehabilitation Centre at the Heart Institute. “Instead, their research focused on the dietary habits of Eskimos and offered only speculation that the high intake of marine fats exerted a protective effect on coronary arteries.”

Bang and Dyerberg relied mainly on annual reports produced by the Chief Medical Officer of Greenland to ascertain CAD deaths in the region. The new study has identified a number of reasons that those records were insufficient, mainly that the rural and inaccessible nature of Greenland made it difficult for accurate records to be kept. In fact, researchers have now found that concerns about the validity of Greenland’s death certificates have been raised by a number of different reports and that 20 per cent of the death certificates were completed without a doctor having examined the body.

The data collected through this new investigation show that the Inuit do have a similar rate of CAD to non-Inuit populations, and they, in fact, have very high rates of mortality due to stroke. Overall, their life expectancy is approximately 10 years less than the typical Danish population and their overall mortality is twice as high as that of non-Inuit populations.

Many recent large well-designed studies have shown ambiguous or negative results regarding the heart health benefits of omega-3 fatty acids and fish oil supplements. Yet, partly based on the work of Bang and Dyerberg, they are still widely recommended as part of a heart-healthy diet.

“Publications still referring to Bang and Dyerberg’s nutritional studies as proof that Eskimos have a low prevalence of CAD represent either misinterpretation of the original findings or an example of confirmation bias [the tendency to favour information that confirms one’s belief or hypothesis],” concluded Dr. Fodor. “To date, more than 5,000 papers have been published studying the alleged beneficial properties of omega-3 fatty acids, not to mention the billion-dollar industry producing and selling fish oil capsules, based on a hypothesis that was questionable from the beginning.”