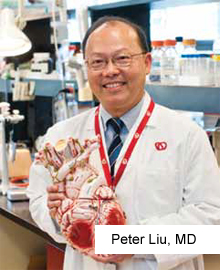 Heart failure is an insidious disease. Its symptoms can be vague—including shortness of breath, swelling of the ankles and fatigue. Too often, patients and family doctors miss the warning signs entirely, explained Peter Liu, MD, Chief Scientific Officer and Vice President of Research at the University of Ottawa Heart Institute. “They think, ‘Oh, that’s just part of getting older,’ until it’s too late. It’s mostly a silent process, and by the time patients get diagnosed, so much damage has already taken place,” he said.

The condition can have many different causes, including damage from a heart attack, viral infection or high blood pressure. Ultimately, the heart is no longer able to do its job of pumping blood to the rest of the body. At least 650,000 Canadians are currently living with heart failure, and likely more, said Dr. Liu, because it often goes undiagnosed. Part of what makes diagnosing heart failure so tricky is that it’s not just one single disease. Instead, it’s a syndrome that has different causes and different outcomes.

Existing treatments have a chance of working only if the disease is caught before the heart’s pumping ability is significantly damaged, explained Dr. Liu. “We want to know earlier who’s going to develop this condition, who’s at risk of getting worse and who could get better with treatment.”

Dr. Liu wants to change the way patients with heart failure are diagnosed. Rather than relying on subjective symptoms, he wants to diagnose it before symptoms appear. This involves the use of cutting-edge molecular diagnostics to measure proteins in the blood that are indicative of damage. To this end, he and colleagues at the University of Ottawa, University of Toronto and Roche Diagnostics International Ltd. have received a $6-million, four-year grant from Genome Canada and Roche itself to bring several promising protein-based diagnostic tests to the clinic.

Over the past decade, research from Dr. Liu’s lab and others has shown that the heart releases different protein-based “SOS signals” when damaged by different causes. Using modern proteomic technologies, which measure a large set of proteins circulating in the bloodstream, it’s possible to pick up these signals before any symptoms of damage are seen, he explained. In addition to earlier diagnosis, identifying these proteins, called biomarkers, holds the promise of more personalized treatment, as different causes of heart damage can require different interventions.

With an earlier grant from Genome Canada, Dr. Liu and his colleagues sorted through 200 candidate proteins that appeared to have potential as biomarkers for early heart failure. Of those, eight showed enough promise to pursue clinical studies. The current grant will allow Heart Institute researchers, and collaborators across North America, to study whether blood tests based on these proteins have the potential to identify the disease early, as well as whether they can differentiate the underlying causes of heart failure in individual patients, thereby guiding treatment.

Dr. Liu’s lab is also interested in how proteomic studies can help identify potential new treatments for heart failure. “A number of these new proteins that we pick up can actually point to new treatments for heart failure. So now we’re looking at designing drugs to treat specific patients with certain markers,” he said. “This is the goal of ‘personalized’ or ‘precision’ medicine for our patients.”

“We want to know earlier who’s going to develop this condition, who’s at risk of getting worse and who could get better with treatment.”

When he’s not in his lab, Dr. Liu is a cardiologist who works with heart failure patients. “Sometimes it’s frustrating, treating our patients with heart failure today and knowing well that there has to be something better that we can offer,” he said. “We have to redouble our research efforts.”

Since joining the Heart Institute in 2012, Dr. Liu has been impressed with the close relationships between the researchers and physicians, and the Heart Institute’s dedication to excellence and patient welfare. He looks forward to harnessing these advantages to move promising new diagnostics and treatments into the clinic.

“We know that heart failure is a complex disease,” he explained. “And so it takes a team to do this. We have very talented people who work on the basic science part, and we have excellent heart failure clinicians who are making sure that the patients we see today get the best care possible. Our hope down the road is that we can pick up the disease early and reverse it entirely so that the patient doesn’t have to suffer at all. The whole idea is that we do such a good job that we’re ultimately out of a job.”