Shoehorned into a small room, the first positron emission tomography (PET) scanner at the University of Ottawa Heart Institute made possible a dedicated PET imaging service for heart patients one day a week. That was in 1995, and cardiologist Rob Beanlands, MD, physicist Rob deKemp, PhD, and nuclear medicine technologist May Aung were excited to launch the PET imaging research program.

Now, 20 years later, 15 to 20 patients access the National Cardiac PET Centre’s expertise and state-of-the-art technology every day, and its list of achievements includes advances in patient care, development of commercial products and services, and influence on health policy.

“We are part of Canada’s first and only PET imaging facility dedicated to advancing the understanding of cardiovascular health, disease and therapy through imaging research,” said Dr. Beanlands, Chief of Cardiology and founding Director of the PET Centre. “We do more cardiac PET imaging here than anyone else in Canada.”

Cardiac PET is a non-invasive nuclear imaging procedure that measures cellular activity in the heart that would otherwise be invisible. By introducing small amounts of short-lived radioactive isotopes into a patient’s bloodstream, cardiologists can see in real time what parts of the heart are using certain substances and how well that patient’s heart is functioning. A PET scan visualizes the biochemistry happening inside the body.

PET is used at the centre to diagnose heart conditions and to determine the effect of repairs such as surgery or implanted devices. The information provided by cardiac PET helps cardiologists and surgeons determine the most suitable treatment for a patient.

“PET provides a unique means for evaluating the heart’s flow and function that other techniques are either not able to do at all or do to a less accurate level,” said Dr. Beanlands. “Simply put, PET provides higher resolution scans and access to more sophisticated biology in the body, and that allows physicians to make the best treatment decision for a patient, including how to best direct the care of that patient.”

The Heart Institute is recognized internationally for its work in assessing and extending the capabilities of cardiac PET imaging. “We have been very active clinically and in research,” said Dr. Beanlands. “This increases our capacity to provide these services and meet the increasing demand for PET imaging.”

The PET Centre’s on-site cyclotron, a compact particle accelerator, allows the group the rare ability to produce many of its own medical isotopes. Isotope production at the Heart Institute is especially beneficial in light of occasional shutdowns of the National Research Universal (NRU) reactor at Chalk River, which produces a substantial supply of technetium-99m, the world’s leading isotope used in imaging technology across all modalities. 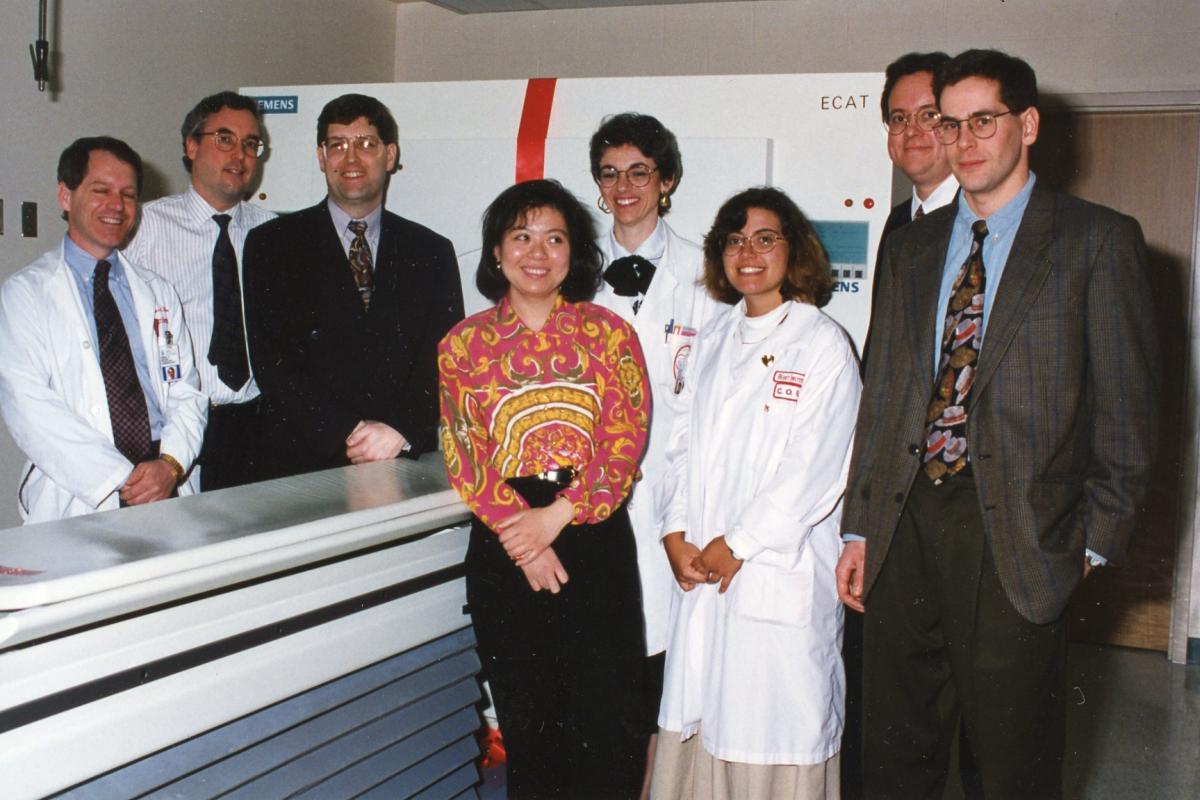 Acquiring the cyclotron was a milestone for the centre, especially in terms of being able to produce fluorodeoxyglucose (FDG), the most widely used tracer for cardiac PET imaging and assessing heart muscle metabolism. FDG viability imaging, or FDG PET, determines how much heart muscle has been damaged by heart disease or a heart attack.

One of the group’s most significant clinical accomplishments has been taking the FDG isotope full circle from early research, through clinical and regulatory approval, all the way to commercial production—and doing so all on its own. Official designation as a production site has allowed the PET Centre to become a local resource, commercially producing and selling FDG to hospitals and other facilities in the region. “The process of obtaining the designation by Health Canada is normally only done by industry,” explained Dr. Beanlands. “For our institution to do this on its own was a huge success.”

The PET Centre’s focus on FDG over the past two decades has been instrumental in securing Provincial reimbursement for cardiac FDG PET scans. Clinically demonstrating that the test can help doctors make better treatment decisions between revascularization, bypass, stenting or transplant options helped make the case for coverage under the Ontario Health Insurance Plan (OHIP). “This set an important precedent,” said Dr. deKemp, the Head Imaging Physicist at the Heart Institute. “It has enabled other hospitals, not only in Ontario, but also across Canada, to recognize that FDG PET is a key technology to help extremely vulnerable patients who have more advanced forms of heart disease.”

“We do more cardiac PET imaging here than anyone else in Canada.”

The Ottawa Heart Institute’s PET Centre has also been a force in developing alternative tracers. Since the centre’s inception, Dr. deKemp has championed rubidium-82 (Rb-82) for perfusion imaging, which helps diagnose coronary artery disease by measuring blood flow to the heart muscle.

The 2007 and 2009 NRU reactor shutdowns at Chalk River highlighted the fragility of relying on reactor-produced radioisotopes. They also highlighted Rb-82 as a viable non-reactor alternative. The PET Centre was funded by the Canadian Institutes of Health Research (CIHR) to train other sites in Canada on the use of rubidium for perfusion imaging of the heart.

“Our leadership in this area derives from our ability to quickly and directly move our research techniques from the laboratory into patient care,” explained Dr. deKemp. “Doing so can prompt medical intervention earlier than might otherwise happen.”

Dr. deKemp has received several patents for his rubidium generator system. One project that has grown from idea to commercialization, with industry partner DraxImage, is a portable rubidium generator called the Ruby-Fill®. It was recently approved by Health Canada for sale in Canada.

“Rubidium is a radioisotope with an extremely short half-life—less than 90 seconds—which does not even leave time to draw it up into a needle,” he said. “The rubidium produced by the rechargeable generator can be infused directly into a patient lying in a PET scanner with the use of a pump system. This has the potential to make rubidium and the test more widely available for patients in Canada and eventually around the world.”

DeKemp’s work has also led to the development of FlowQuant©, a clinical and research software tool for quantifying myocardial blood flow in small vessels and at very low volume from nuclear medical images. The ability of researchers to investigate tiny vessels permits examination of the microcirculatory effects of diabetes, for example, and the effects of hormones on the heart.

Dr. Beanlands is proud of the PET Centre’s work in making PET imaging both a tool for better diagnostics and decision making, as well as for new therapies. “We now have ways to identify people who have diffuse disease that might have been underestimated before, as well as ways for defining small vessel disease, which is common in women,” he explained.

He is certain that there are many more successes to come. “Our Molecular Function and Imaging Program is a structured research program that provides an environment for training young scientists, clinicians, nurses and technicians. They are the foundation of our current and future research,” said Dr. Beanlands.

“The PET Centre enables cardiologists and surgeons to stay at the cutting edge of diagnosis and treatment of heart disease,” he added. “We can take what we’ve learned in the lab and apply it directly to patient care. That is how we will remain on the frontier of what is new and what will help make people better.”