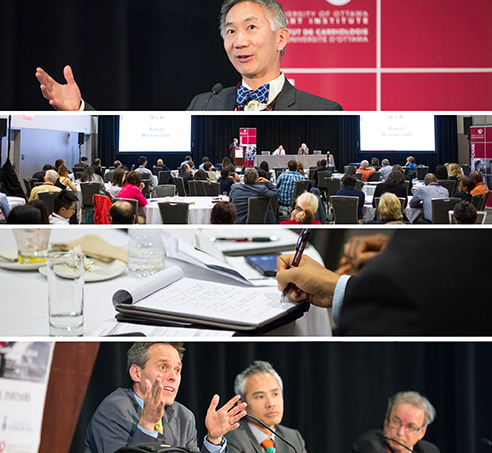 As a heart condition whose leading risk factors include advanced age and excess weight, it’s no surprise that atrial fibrillation (afib) is a growing healthcare concern. Marked by a rapid and irregular heartbeat, afib can seriously impact quality of life and increases the risk of stroke. Right now, afib affects about 350,000 Canadians. That number is expected to triple by 2050.

Atrial fibrillation is a complex condition in that its causes vary from person to person, impacting its underlying mechanisms, what triggers episodes and which treatments are effective in each individual. In addition, afib can be difficult to diagnose because it is often episodic nature and in some people causes no symptoms.

In that context, the Ottawa Heart Research Conference chose atrial fibrillation as the focus of its 2016 meeting in June. Paired this year with International Toronto-Ottawa Heart Summit and the Eastern Ontario Cardiovascular Summit, the program of leading physicians and researchers from Canada, the United States and England provided a detailed overview of the field and what we can expect in coming years.

An individual’s risk of developing atrial fibrillation is affected by three types of factors:

Of people in their 70s, 10% have afib, with the percentage increasing with increasing age.

Obesity is a major risk factor for the condition. This seems to be tied to the systemic inflammation associated with metabolic syndrome, which many obese individuals suffer from. As presenter Peter Backx,PhD, of York University explained, the activity of cell signalling pathways associated with inflammation is increased in people with atrial fibrillation.

Because treatment options for atrial fibrillation aren’t always effective, prevention should be a priority. Ratika Parkash, MD, of Dalhousie University and others emphasized the potentially debilitating effects of afib. One of her patients likened his heartbeat during an episode to a section of rocky rapids in a stream. Physical symptoms include shortness of breath, tiredness, dizziness and faintness, but afib can also result in anxiety, depression and reduced social interaction.

Exercise is an important way to reduce the likelihood of developing atrial fibrillation as well as reduce its impact on quality of life. As Jennifer Reed, PhD, of the Ottawa Heart Institute explained, regular exercise can help manage the condition, reduce the severity of symptoms and improve physical functioning.

The Heart Institute’s Cardiac Rehabilitation Program recommends the following approach for those with atrial fibrillation:

Management of atrial fibrillation has two primary components: treating the arrhythmia itself and preventing stroke. A variety of medications are available to treat either the rapid heart rate or the irregular heartbeat. While these therapies benefit some patients, they are not effective for others.

For patients who have failed with at least one anti-arrhythmic medication, catheter ablation is the next line of therapy. The procedure is effective in 60 to 80% of patients at 12 months and has low rates of major complications. The goal of ablation is to improve quality of life. There is no evidence that it lowers stroke risk. For permanent afib, success rates are lower and more extensive ablative approaches may be necessary.

Treatment decisions should be made based on the individual patient’s situation: the extent of their atrial fibrillation burden, their symptoms, and their personal values and preferences.

Dr. Lip, in his Professor Martin Green Keynote Lecture, discussed the evolution of risk scores to support decision-making in stroke prevention. The CHA2DS2-VASc score was developed to address under-treatment resulting from the CHADS2 calculation. CHA2DS2-VASc includes additional stroke risk factors while remaining simple to use, though less common risk factors are still excluded.

Oral anticoagulants (OACs) have supplanted warfarin as the first line of therapy for reducing stroke risk. The four available OACs are more similar then different, said Dr. Calkins. He suggested that physicians become knowledgeable about one and prescribe it most cases.

Because ablation does not significantly affect stroke risk, patients who were on an OAC before undergoing ablation should continue following the procedure.

There is evidence that, in atrial fibrillation patients, the left atrial appendage (LAA) is the source of most stroke-causing clots. The use of devices to block clots in the LAA is a treatment approach that is gathering steam. One device has so far been approved for use in the United States.

Research is underway in a number of areas to improve the understanding and treatment of atrial fibrillation. One area of interest is identifying biomarkers that could help detect afib early on or point out individuals with underlying risk. Dr. Liu indicated that biomarkers could also aid in personalizing treatment approaches by differentiating individual mechanisms of afib in order to guide therapy.

Many potential targets are being looked at, including: blood pressure, inflammation, fibrosis, cell death, ion channels, the autonomic system and high-sensitivity troponin. Dr. Liu indicated that clinical research trials are needed to assess therapies in patients based on the characteristics of their afib.

Genetics offers another set of possible markers for targeting treatment. As already noted, anti-arrhythmia drugs and catheter ablation work in some patients but not others. Jason Roberts, MD, of Western University, described how genetic screening could be used to personalized therapy. While he indicated that it was early days for this approach, for screening purposes, it is not necessary to understand what a genetic marker does or how it functions. It is enough to know if it is associated with particular therapeutic outcomes.

Point-of-care testing could be used to provide quick results (See “RAPID GENE in The Lancet”). To date, one gene has been associated with reduced effectiveness of ablation, and some data exist for anti-arrhythmia drugs.

Jeff Healey, MD, of McMaster University outlined a number of other open clinical questions, including: How common is atrial fibrillation in the general population, and should we test for it? He suggested that this might make sense in older adults. Is it afib itself that causes stroke? Does it cause dementia?

On the behavioural side, further research into how improving modifiable risk factors can impact the occurrence and severity of afib is needed.

In terms of delivery of care, the presence of and access to atrial fibrillation clinics across Canada is inconsistent. The Cardiac Arrhythmia Network of Canada (CANet) is a wide-ranging partnership of health care professionals, academia, government, industry, not-for-profit and patients with a mandate to improve access, quality and effectiveness of afib treatment. Among their goals is a 20% reduction in atrial fibrillation hospitalizations and emergency department visits over the next 10 years. The Canadian Stroke Prevention Intervention Network (C-SPIN) is a parallel initiative focused on stroke.