Living on a Salt-Restricted Diet 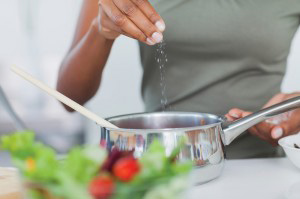 Across the country and among all age groups, Canadians eat too much salt. Health Canada estimates that, on average, Canadians are eating daily more than double the amount of sodium that the body needs to function. For some people with cardiovascular disease, especially heart failure, high blood pressure (hypertension) and pulmonary hypertension, this excess sodium intake poses an immediate threat to their health.

But living on a salt-restricted diet can be a challenge. “It’s really hard to know how much sodium is in food because you don’t see it,” explained Kathleen Turner, a registered dietitian with the Division of Cardiac Prevention and Rehabilitation at the Ottawa Heart Institute. “It just disappears into whatever food that you’re eating.”

The hidden nature of sodium makes it vital for patients to be aware of what they eat and to have effective and practical strategies for making a low-salt diet part of their daily routine. “Changing one’s diet is very hard…but it’s a self-care component of managing these conditions that’s very important,” commented Christine Struthers, advanced practice nurse for the Heart Institute’s Cardiac Telehealth program.

Once eaten, sodium acts like a sponge and makes the body hold onto water. Moving this extra water through the blood stream requires the heart to work harder and raises blood pressure. For patients with heart failure or pulmonary hypertension, whose heart or blood vessels in the lungs are already damaged, such extra work can be more than their cardiovascular system can handle, leading to a trip to the emergency room.

For people with hypertension, there isn’t a measurable correlation between a single salty meal and a sudden spike in blood pressure, so it can be difficult for patients to understand the effect that salt has on their system, said Struthers.

This doesn’t mean the long-term wear and tear on the blood vessels isn’t real, she added, noting that uncontrolled hypertension is currently a major risk factor for heart failure. “It’s important for patients to focus on long-term control of their blood pressure, so they don’t get sicker in their 60s, 70s, or 80s,” she explained.

For patients with heart failure, the link between salt intake and health is more obvious. Because of their weakened heart, the extra fluid soaked up by sodium in the blood stream tends to pool in their legs and abdomen: a direct visual reminder of how their diet is impacting their body.

The Heart Institute’s heart failure patients are encouraged to track their weight daily, and those in the Telehome Monitoring program transmit the information electronically to the Institute. “I can tell without a shadow of a doubt that on Monday, when a patient’s weight is up 3 kilograms, that it’s usually related to something they ate that was very salty on the weekend,” said Struthers.

For many patients, understanding the cause-effect relationship between eating something salty, increased weight and increased shortness of breath or swelling of the legs “is like having a light bulb go on,” in terms of understanding the importance of avoiding salt, she added.

Patients should keep in mind, though, that not all people’s bodies react the same way to a certain dose of salt. Some can eat a small amount of something salty if they make low-sodium food choices the rest of the day, experience no ill effects, explained Struthers. For others who are more sensitive to sodium, a concentrated dose of salt can immediately land them in the hospital.

“Through trial and error, patients need to find out for themselves what they can and can’t eat,” said Struthers. “It’s very difficult, and that’s where dietitians become very helpful, because they can talk about adapting meals to a low-salt diet so it’s not so frustrating.”

When counseling patients trying to change their diet, Turner always reinforces patience. “Salt is one of those things that you develop a taste for. When patients start to cut back on the salt they’re eating, those first couple of weeks can be really tough for them,” she said. “Everything they’re used to eating tastes a bit bland. They’re not used to it, and they feel frustrated because their food doesn’t taste the way they want it to.”

“The good news is that people’s taste buds do change,” she continued. “If you stick with it, you’ll eventually get used to food without salt, and you won’t miss it at all. And in fact, once they get used to it, people find they really don’t like the taste of salt. When they do eat something salty, they find the taste overwhelming.” 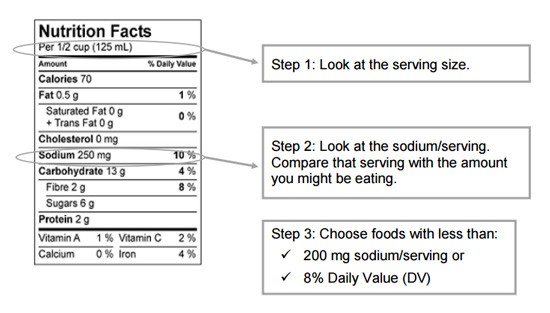 For patients who are trying to cut back on salt, encouraging them to do more cooking at home from scratch is a priority for Turner. “Restaurant food is always higher in sodium than what you’d make at home,” she said. “And about 75% of the sodium we eat is in processed foods, including things like cereals, pasta sauces and canned tomatoes, where you might not see it or taste it. That’s the big culprit for salt. So while you want to reduce the amount of salt in your cooking at home, you should really be focused on reducing the amount of packaged foods that you’re eating.”

The Heart Institute’s dietitians encourage people to learn how to read food labels and to pick foods that have less than 200 milligrams of sodium or less than 8% of the recommended daily value per serving.

Though the learning curve is steep at first, the payoff is worth it, commented Struthers. “This is something that patients can do to help themselves,” she said. “We can give all kinds of medications to eliminate extra fluids, but these medications do have side effects and don’t necessarily improve survival. The more patients can do for themselves, the fewer medications they will need. Care becomes much more of a partnership,” she concluded.